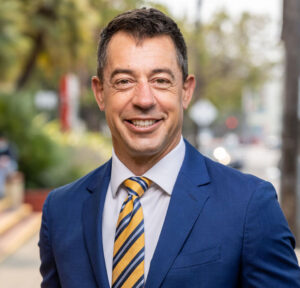 Stephen’s primary reason for joining Cristo Rey De La Salle is his desire to deepen his faith and serve his community. He is excited to commit fully and to serve with deep humility in a life of service within a Catholic community. He expresses great joy in the opportunity to blend his professional skills with his vocation.

The professional traits that Stephen nurtured as a licensed attorney translate well to the president/CEO role at Cristo Rey De La Salle. He comes to us from the Alameda County Family Justice Center, District Attorney’s Office, where he held the position of Director. The Family Justice Center co-locates 30 governmental and non-profit organizations which serve individuals who are victims of interpersonal violence. Prior to serving at the Family Justice Center, Stephen was the co-founder and managing partner of a law firm specializing in domestic violence, family law, immigration, and estate planning. His wife, Monalisa, is a co-founder of their law firm and Professor of Legal Writing at the University of San Francisco School of Law.

Stephen lives in Berkeley with his wife and three young children. He teaches Sunday School to Kindergartners and First Graders at Newman Center in Berkeley where he has been a parishioner since his freshman year at Cal. He is the PTA president at his daughters’ school and is a postulant for the 3rd Order of St. Francis (The Confraternity of Penitents).

Stephen shares, “I am humbled and blessed to have an opportunity to serve the Cristo Rey De La Salle East Bay students and their families. I look forward to continuing the great work already established by Matt Powell, the Board of Trustees, Ana Hernandez, John Coughlan, and the Cristo Rey East Bay High School staff.  Together we will work hard to live up to the hallowed educational tradition set forth by the Cristo Rey Network and De La Salle Christian Brothers.”