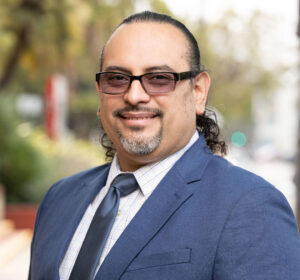 Mr. Martinez is a native of San Francisco’s Mission District and has been a Catholic school educator since 2000. He is excited to join Cristo Rey De La Salle to give back what he has received from his own Catholic school experience and help guide and mentor the students and staff at CRDLS. Having attended Catholic elementary and high schools, he earned his B.A. in History and his M.A. in Education from San Francisco State University. He also attended St. Mary’s College of Moraga and the University of San Francisco to work on his administrative credential. Mr. Martinez has served as a History, Theology, Spanish teacher, Dean of students, Director of Summer Programs, and has led three schools in their WASC / WCEA accreditation process. Mr. Martínez comes to CRDLS with a strong commitment to serving the school community.

He now lives in Daly City with his wife, their two sons, and two dogs.