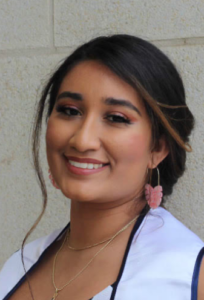 Krystal Alvarez is the daughter of Mexican immigrants but was born and raised in the Bay Area. She recently moved back home after graduating this past May from the University of San Diego and is the first in her family to graduate from college. She received a Bachelor of Arts degree in Liberal Studies with a concentration in Spanish and a minor in Ethnic Studies. She is very passionate about education and social justice and believes that working with students of color to reach their highest potential is the perfect intersection of her passions. In the future, she hopes to pursue a Master’s degree and teach Ethnic Studies. During her time at USD, she served in various leadership positions in clubs such as MEChA and the Association of Chicanx Activists, and also as a senator for the university’s Student Government. Off-campus, she volunteered with the American Civil Liberties Union to encourage people to vote, educate them, and get them involved in their community. She also worked as an after school Spanish teacher to students from ages 5 to 60. In her free time, she enjoys reading, playing sports, listening to music, gardening, spending time with loved ones, and discovering new cafes/restaurants.
Last summer, she had the opportunity to serve as a MICAH Fellow at CRDLS where she found a welcoming community. Having attended St. Mary’s College High School in Berkeley, she is familiar with the Lasallian tradition and is very excited to be back at Cristo Rey.