Thank You! We Did It! 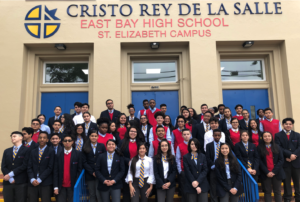 OAKLAND, Calif. (July 12, 2019)—Cristo Rey De La Salle East Bay High School (CRDLS) today announced that it has raised a total of $268,565.73 as part of a matching gift pledge from Silicon Valley real-estate developer and philanthropist John A. Sobrato. In November, Sobrato pledged to donate up to $250,000 in matching funds for all donations made through June 30. Supporters of the Oakland-based Catholic high school met and far exceeded the challenge, raising an extra $10,000 in the final hours of the challenge.

CRDLS will put the funds to good use by supporting the school’s day-to-day operations. One hundred percent of Cristo Rey De La Salle faculty members donated, helping to meet and  exceed the challenge well in advance of its deadline. “We are extremely grateful for the generosity of Mr. and Mrs. Sobrato, who has continued to supportour commitment to the Catholic education of young men and women,” said Matthew D. Powell, Interim President at Cristo Rey De La Salle. “We would also like to thank the generosity of oursupportive community who helped double the donation.”

Cristo Rey De La Salle East Bay High School is a diverse, Lasallian Catholic learning community that educates young people to become men and women of faith, purpose and service. The school believes that economic status, zip code, gender and ethnicity should not obstruct the pathway to educational and life success. Every student earns up to half of his or her annual tuition through Cristo Rey’s Corporate Workstudy Program. All families contribute to tuition based on an ability to pay, however, there is still asignificant gap of around $8,000 per year per student at full enrollment.