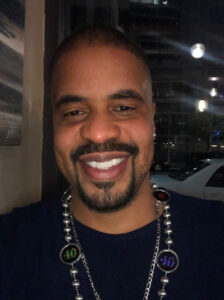 Mr. Coron Brinson who was born and raised in Georgia. He was brought up by a family that always promoted the importance of education and faith, particularly by his grandfather, who was stripped of his ability to continue his education at the 7th grade. Mr. Brinson has worked in education for over 10 years, starting as an elementary and middle school teacher in Chicago in 2005. There are 3 generations of educators in his family and he continues to keep that legacy alive. He is super excited about his new role as Dean of Students for Cristo Rey De La Salle!

Mr. Brinson gained experience organizing while working for S.E.I.U., where he led the “Fight for 15” campaign to advocate for livable wages for retail and fast food workers. He has also served as a Parent Organizer in Oakland and supported homeless communities as a Youth Advocate in Chicago and Los Angeles. Coron’s work with the Black Teacher Project started in 2016 as a member, Advisory Board Member, BTP Fellow and he is excited to be in his new role as Teacher Organizer. Coron received his B.A. in History from the University of Georgia, M.Ed in Elementary Education from Lincoln University, and M.P.A. in Nonprofit Management from the University of Southern California.