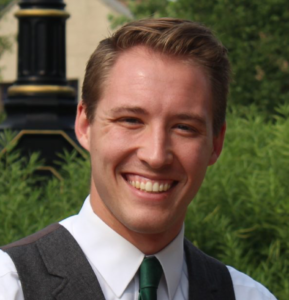 Mr. Benjamin Peters is a second year Lasallian Volunteer coming to us from San Miguel Middle School, Washington D.C. where he was previously assigned to: teach Religion and English, serve as a librarian and proctor, and complete a variety of other duties. He grew up in rural Minnesota in a town of less than 10,000 people and graduated from Saint Mary’s University of Minnesota in 2018 with a double major in Philosophy and History. After spending two years at Immaculate Heart of Mary Seminary in Winona, MN from 2014-2016, he continues to discern a vocation to the dioscician priesthood, which he hopes to continue in the following year. He is excited to be working with students for another year of service and is looking forward to building many relationships with them through his service in Campus Ministry, Community Life, and assisting in class. Ultimately, he hopes to help build up each individual student, the community, and the role of Lasallian Volunteers in this new ministry.