Our New Director of Wholeness 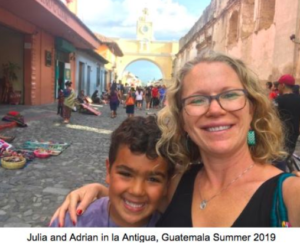 Julia Sitko is a bilingual licensed clinical social worker who has worked in education her entire career as both a middle and high school teacher and as a social worker. Ms. Sitko comes toCRDLS from Oakland Unified School District where she managed a district wide program for recently arrived immigrant youth. Ms. Sitko is passionate about the well being of our young people and brings creativity and enthusiasm to her work. Young people have always been Ms. Sitko’s greatest teachers and she is excited to return to direct service work with youth and families at Cristo Rey de la Salle.Ms. Sitko is the mother of an adventurous boy named Adrian. She lived in Guatemala before moving to Oakland 10 years ago, but she brings Adrian back there as often as possible, as it is
like a second home for them. They love to travel and together they have visited almost all of the countries in Central America. Other interests besides international travel include reading, dancing, boxing, hanging out with her son and dog, cooking (and eating) and swimming preferably in lakes, rivers and oceans.