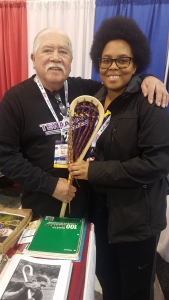 “A coaching philosophy is a way for players and families to understand where you stand as a coach and how they will be held accountable to the standards of the program,” Davenport shared. Miss Davenport’s coaching philosophy of “You’re a person first, a student second, and an athlete third” is at the foundations of CRDLS Athletics. Her goal is for all athletes and families to understand that without taking care of the person (health, needs being met, sportsmanship, etc), other aspects will falter. With academics next, it reinforces the foundation that we have student athletes who have expectations in the classroom. Finally, as an athlete, there’s a cultural aspect to being a teammate as well as an accountability for time management and communication.

While at LaxCon, Miss Davenport attended several sessions for her own development as a lacrosse coach and as an Athletic Director. She began with her Level 3 Coach Certification on Friday and continued on to a class entitled “The Shake School: The Art of Movement”. In the Shake School session, Kacy Small and others demonstrated the importance of footwork and movement that assists in athletes being able to better dodge in a variety of game settings with a lower risk of injury. Davenport shared, “It was really interesting to see both professional men’s and women’s lacrosse athletes perform these movements–it was just astounding to see how fast they move.”

“The highlight of the trip, though, was meeting and getting a stick from Alf Jacques. Alf is a stickmaker of the Onondaga Nation who still makes and brings his handmade sticks to the convention each year. It was wonderful to get to talk to a man who has seen lacrosse transform over the decades and to just see so much history of a sport that I love in one place.”