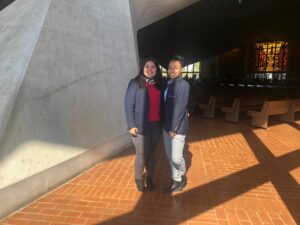 The De La Salle Christian Brothers ( Fratres Scholarum Christianarum) of the District of San Francisco New Orleans (SFNO) celebrated the sesquicentennial anniversary of the Brothers in California. The day began with Mass at the Cathedral of Saint Mary of the Assumption. The Archbishop Salvatore J. Cordileone presided over the services. Bishop Thomas Daly of Spokane was the concelebrant and homilist. It was followed by a reception in the Cathedral events hall.

We are so proud of our student associates who participated in the 150th year Celebration Mass of the Christian Brothers’ service of the San Francisco Bay Area and the larger San Francisco/New Orleans District. What an exciting day to celebrate and share in our Catholic and Lasallian Faith!