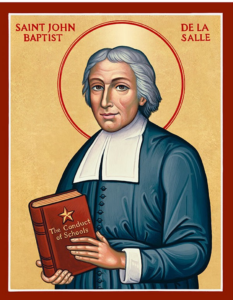 We celebrate this week with Lasallian Schools around the world. Normally we would do a variety of activities, service projects, and more. This year we’re going to be sending a newsletter with reflections from students, testimonials from staff, interesting facts about De La Salle and the Institute, as well as a prayer.

What did St. John  Baptist De La Salle Do?

In the 1680’s he founded the Brothers of the Christian Schools. He was declared a saint in  1900 and in 1950 he was declared the Patron  saint of educators. The Brothers have gone  on to start many schools including Cristo Rey de la Salle!